Extracted from notes made during a cruise from Barbados to Cape Town. It seems important to mention that a flying one-day visit is no way to form an accurate impression of a society, but one day was all we had in each of the countries we visited down the west coast of Africa in early 2016. These notes, drawn from immediate experience, are nothing more than vignettes. And you know what they say about first impressions …

The many faces of Africa: Namibia is yet again an entirely different country. We dock at Walvis (whale fish) Bay, a neat, clean, orderly-looking town–a legacy of the Dutch and Germans–and head out to Walvis Bay lagoon, a protected ocean wetland that is spectacularly rife with flamingoes, and then into the Namib desert, which stretches in a broad strip right up the centre of the country until it joins the Kalahari. This desert is a wondrous place, filled with life despite the apparent desolation. The creatures here are real survivors: desert rats that build nests of twigs, lizards that have evolved with no eyelids so they can lick the moisture from their eyes, oryx who can survive on the water that collects on leaves from the overnight fog, and a plant whose Latin name includes the word mirabilis–not surprising when you learn it can live for 1,000 years, has only two leaves that never die, and refuses to release seeds for germination unless there’s ten millimetres of water available, which means once every forty years or so. Ugly bugger, which is perhaps also not surprising when your main worry is staying alive.

The dunes are sweeping and always changing. We stop at Dune 7, apparently one of the highest sand dunes in the world, though after her exploits in the Dubai desert Susan is disappointed that dune-boarding is forbidden. We make our way to Swakopmund, a little tourist paradise, clean and neat. It looks identical to those pretty holiday towns up the east coast of Vancouver Island, an idealized suburbia plonked down beside the ocean on the edge of the desert. Of course, Vancouver Island towns don’t have topless tribal women suckling their young as they sell trinkets outside the local museum (it’s all suspiciously tourist-oriented, but they don’t want money in exchange for being photographed–they want you to buy their bangles), nor do they have spike-haired hawkers following you round for two hours. When you finally buy a soapstone carving from him, you find you’re his only customer of the day.

English is the official language of Namibia but most of the signage is in English, German and Dutch, and there’s a strong Germanic flavour to the architecture in the older part of town and the general sense of order. At the Kristal Galerie you have to pay to get in–it’s a shop but they’ve turned it into an Aladdin’s cave of colour and dazzle. Minerals have been big in the history of Namibia, diamonds at first and uranium right now, which is apparently being shipped in quantity to the Russians. On the way back to the ship we pass a long narrow strip of hotels, pale ochre buildings to match the desert, and fences to define the abrupt line between dropped-in civilization and the enduring sandy wilderness. Our driver points out the hotel where “Brangelina” (his term, not mine) came to have their Namibian baby. Apparently they rented the entire hotel to keep the curious out. Irony abounds.

Back on the ship we get a lovely little performance by a local youth choir. “The most exciting thing in five weeks,” says the sweet lady who spends all day playing patience by herself in the ship’s coffee bar (a recovering stroke victim, I’d guess–we have nice little chats when I stop by for cappuccinos). The songs the choir sings are mostly in various African dialects, and at one point the assistant choirmaster tries to teach the mainly elderly audience some of the basic click sounds. You can hear dentures hitting the floor all over the theatre. (continue reading below images.) 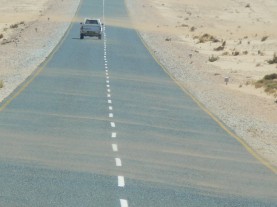 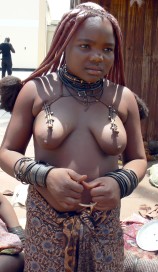 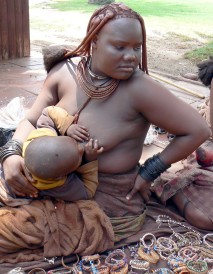 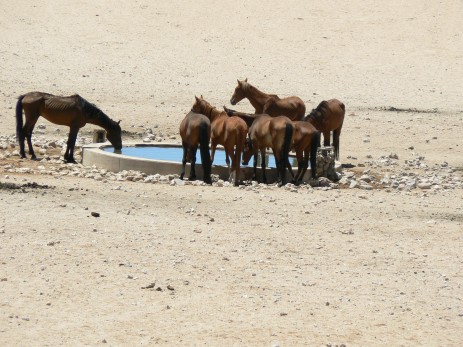 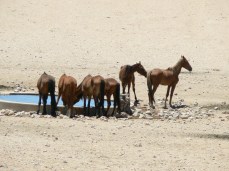 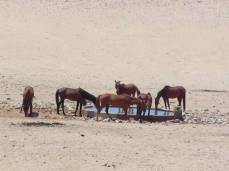 The following day we’re still in Namibia but much further down the coast in Luderitz, a tiny, former fishing community long impoverished by over-fishing, primarily German–a one-Horst town, I’m tempted to say. It sits like a Maritimes outport on sand dunes beside the ocean, looking as if a good sandstorm could blow it all into the water. We drive well over 100 km out into the desert to see the fabled wild horses of the Namib–something we’ve been looking forward to.

This is a very different sort of desert–volcanic outcroppings, lava pools, patches of scrub, barren, rocky hills and distant mountains, not so much Lawrence of Arabia, more how it’s likely to be on Mars, and always the sand, blowing across the ribbon of road, blocking (to the depth of several feet in some places) the narrow-gauge railway (fortunately out of service) that parallels the road. No one around for miles but us–and, eventually the horses.

They are feral horses rather than wild, though our guide is never sure how many, if any, are going to come down to the man-made watering hole on any given day. We see about 20, tough, lean survivors. The pack was recently counted at 273, though the number fluctuates according to the living conditions: Darwinism in action. No one knows where they came from. Shipwreck? Unlikely–the ocean is way across the desert mountains. Leftovers from the German cavalry when they were driven out by the Brits in 1915? Unlikely–headquarters was 250 miles away. But they’re certainly here, noble, determined creatures who have made this desert their home. Other creatures have tried and failed. On the long drive back we run into a significant sandstorm, almost obliterating our view of an abandoned mining settlement. A harsh life in an unforgiving landscape.

This site uses Akismet to reduce spam. Learn how your comment data is processed.